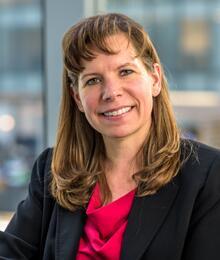 HRSA works to fill in the health care gaps for people who live outside the economic and medical mainstream. HRSA's $10 billion annual budget (FY 2015) expands access to quality health care through an array of grants to state and local governments, health care providers and health professions training programs.

As head of the Bureau of Primary Health Care (BPHC), Bowers manages a nearly $5 billion budget that supports the health care safety net for many underserved people across the country. Most of these funds support over 9,000 health center sites. Located in communities nationwide, these sites provide comprehensive, culturally competent, quality primary health care to nearly 23 million people.

Previously, Bowers served as deputy associate administrator for BPHC from 2012 to 2015. Prior to her time as deputy, Bowers was the director of the Office of Policy and Program Development in BPHC, where she oversaw the expansion of HRSA-supported programs through more than $6 billion in funding awarded under both the American Reinvestment and Recovery Act and the Affordable Care Act.

With 20 years of experience with the health center program, Bowers has served in several capacities at BPHC from 1995 to 2008. She has been instrumental in the maturation of the program, helping to develop the key Health Center Program requirements and accompanying guidance and technical assistance.  Bowers was also responsible for ensuring billions of dollars were awarded over the last 20 years to support ongoing care in communities across the United States.

Before joining HRSA in 1995, Bowers worked at a health center in Connecticut.

Bowers graduated from Trinity College (Connecticut) with a degree in third world studies and religion and has a Master of Health Science in health policy from the Johns Hopkins School of Public Health and Hygiene.