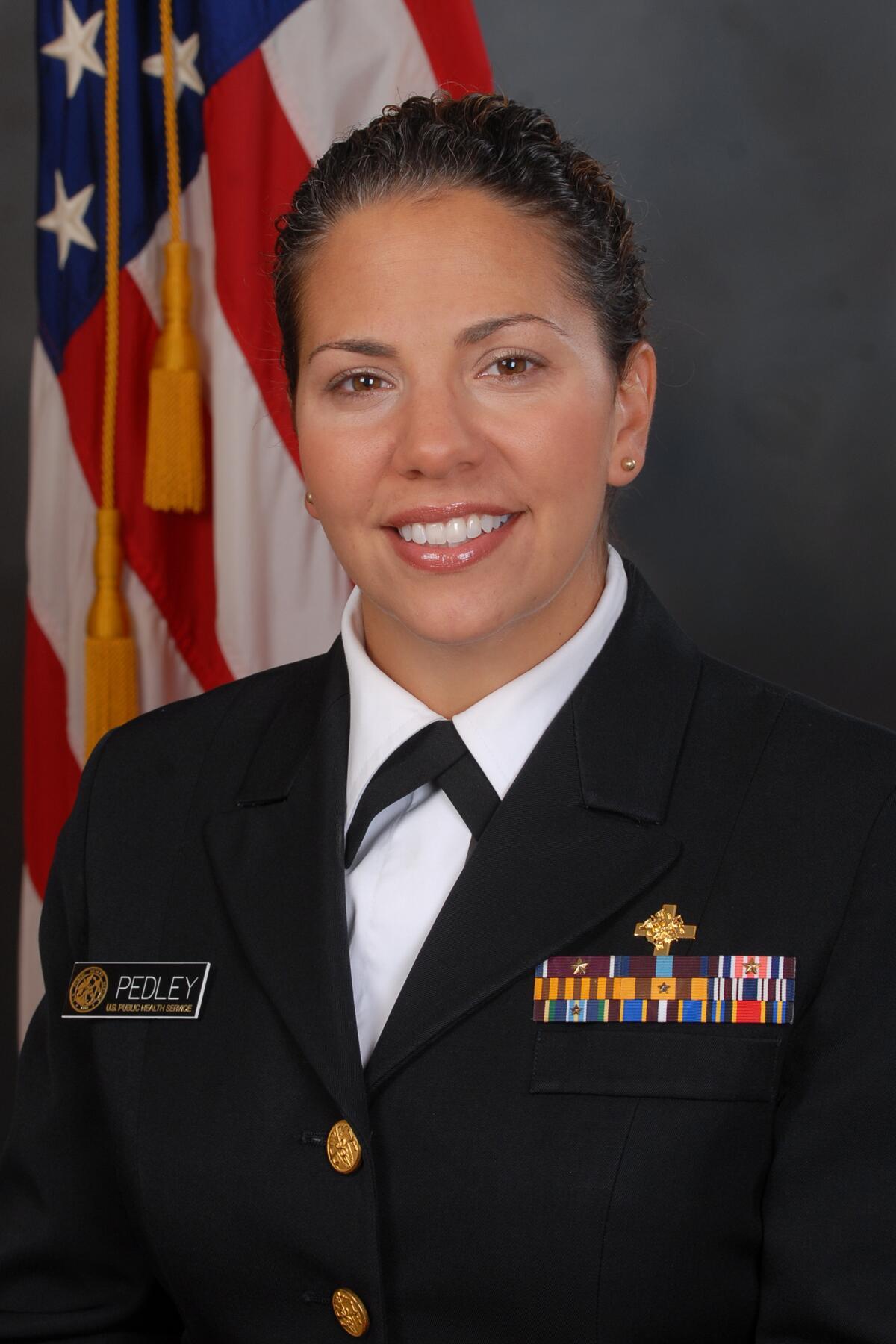 Rear Admiral Krista M. Pedley is the Director of the Office of Special Health Initiatives (OSHI) in the Health Resources and Services Administration (HRSA). OSHI provides a crosscutting focal point for HRSA to deliver on population health and Secretarial priorities, especially those that may be more clinical in nature. Specifically, OSHI coordinates and collaborates with components in the Department of Health and Human Services (HHS) that align with the work of OSHI; coordinates HRSA's work on Long COVID, climate change and environmental justice; serves as the principal advisor within HRSA on global health issues and the President’s Emergency Plan for AIDS Relief (PEPFAR); provides agency-wide leader-ship and policy development in the administration of the 340B Drug Pricing Program to promote access to clinically and cost effective pharmacy services to the country’s most vulnerable patient populations; serves as the lead on behavioral health issues that span HRSA; provides cross-cutting leadership on HRSA oral health programs; and oversees HRSA's Commissioned Corps Affairs. She previously served as the Director of the Office of Pharmacy Affairs (OPA) for over eleven years where she led the administration of the 340B Drug Pricing Program, where over 700 drug manufacturers provide discounted outpatient drugs to safety-net clinics and hospitals that purchase approximately $44 billion in 340B drugs annually. The 340B Program spans HHS and focuses on drug pricing transparency and reducing the cost of medications for the country’s most vulnerable safety-net patient populations.

RDML Pedley began her career as a pharmacist with the United States Public Health Service in May 2000. She was assigned to the Food and Drug Administration, Office of Generic Drugs, as a Project Manager for Bioequivalence and then as Medical Affairs Coordinator reviewing topical drug protocol design. After five years, RDML Pedley transferred to HRSA and then the Office of the Secretary of Health and Human Services, where she served as Senior Public Health Analyst for the National Bioterrorism Hospital Preparedness Program (NBHPP). In 2007, RDML Pedley began working with OPA, where she led a national collaborative that focused on integrating clinical pharmacy services into primary care to improve the health of patients with multiple chronic conditions. She then became the Director of OPA in July 2010 and was promoted to Rear Admiral and Assistant Surgeon General in February 2020.

RDML Pedley received her Doctor of Pharmacy degree at the University of Pittsburgh in 2000 and her Master of Science in Engineering Management and Systems Engineering, with a Concentration in Crisis, Emergency and Risk Management, from The George Washington University in 2008. She is also a 2011 graduate of the Public Health Leadership Institute (PHLI) Scholar Program.

RDML Pedley has participated in numerous deployments, including Hurricane Katrina, the Presidential Inauguration in 2005, and Hurricanes Frances, Ivan and Isabel. RDML Pedley was also a Contributor on the Report to the Surgeon General on Clinical Pharmacy and Co-Author on PHS Pharmacy Prevention Strategy.